Presentation by Varvara and Bekki at the International Transdisciplinary Conference

In September 2021, Varvara Nikulina and Rebecca Laycock Pedersen, presented their work at the International Transdisciplinary Conference. The theme for the conference was Creating spaces and cultivating mindsets for learning and experimentation.

Researchers contributed with the study titled “Dialogue between transdisciplinary and action research: modus operandi and what we can learn from it”. The abstract is presented below and the presentation can be listened to here: https://www.researchgate.net/publication/354890773_Dialogue_between_transdisciplinary_and_action_research_modus_operandi_and_what_we_can_learn_from_it 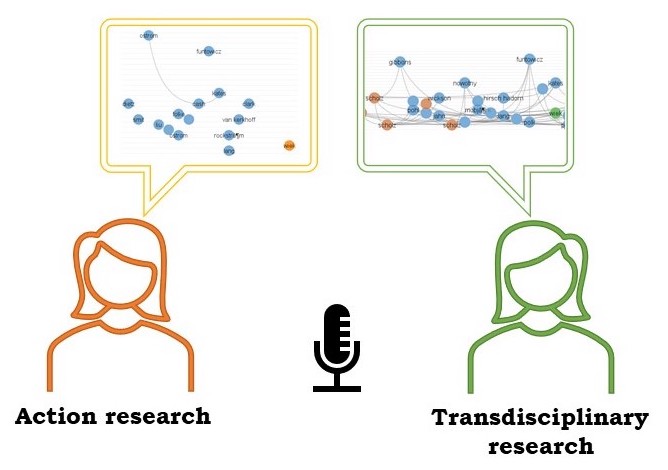 We need research leading to timely, meaningful, contextually appropriate solutions for society’s wicked sustainability challenges. Though transdisciplinarity (TDR) is thought to be sustainability sciences’ modus operandi, there are many long-standing traditions of socially engaged research applied in sustainability, e.g., applied research, citizen science. Clarity about differences and similarities, and whether/how they can be used together enables researchers to learn from different traditions and make informed decisions about the best approach for their context. Here, we explore bibliometric differences between action research (AR) and TDR in the field of sustainability, and how concepts from AR can complement TDR. To do this, we conducted bibliometric analyses of peer-reviewed TDR and AR articles from Scopus (found searching for ‘sustainability’ and its derivatives, in combination with either ‘transdisciplinarity’ and its derivatives, or ‘action research’). We then considered the main procedural differences between the two approaches, and how Heron and Reason’s ‘extended epistemology’ and Herr and Anderson’s (2005) insider-outsider continuum could be used by TDRers.

We identified six times as many AR as TDR publications, indicating AR is a more mature field. The most cited TDR publications did not overlap with those in AR, with the exception Kates et al. (2001). In co-citation analysis, we also found that publications in TDR cited similar sets of articles, creating networks, whereas the reference lists of AR publications were more varied, and there was only one co-citation among the 40 most frequently cited articles. There were several publications that both bodies of literature cited, e.g., Wiek et al. (2011).

Methodologically, AR is typically modelled as ‘spirals’ intertwining action and reflection. There is less consensus about how to ‘do’ TDR, although researchers have proposed processes and ideal-types. Through comparing the spiral and TDR ideal-types/processes, we explain that AR emphasises action-for-knowledge, making it best-suited to contexts where action is a priority, and TDR emphasises knowledge-for-action and is best-suited when reflection is needed. To avoid siloing into ‘research-practitioners’ and ‘practitioners-who-research,’ we suggest a relational approach is needed, which could be supported by Heron and Reason’s (2008) ‘extended epistemology.’ They urge that four different ways of knowing are needed to ensure (1) action is rooted in our reasoned, subjective and tacit understandings, and (2) our truth claims align with both our experience and theories.

Reflexivity has received considerable attention in both TDR and AR. As scholarship on roles/identities in TDR often fails to problematise positionality regarding contextual embeddedness, we suggest that Herr and Anderson’s insider-outsider continuum (2005) can help TD researchers better articulate and reflect on their positionality, especially when their positionality varies between stakeholders/shifts during the course of a project.

In summary, we found the main differences between TDR and AR are TDRers seem to be in conversation with one another more than ARers, and while AR emphasizes action-for-knowledge, TDR emphasises knowledge-for-action. In order to avoid siloing of the two approaches, TDR can draw on AR’s extended epistemology and learn from AR work on insider-outsider positionality to enhance reflexive work in TDR.

Authored by Varvara Nikulina in September 2021